So, I had a fascinating Saturday morning, taking part in the Radio Sheffield breakfast show with Kat Cowan and guest chef, Lee Vintin (from the Chequers Inn), which was all about gluten free food. It was a frenzy of cooking activity for an hour, punctuated by discussion about all things coeliac in between the records and bulletins.

You can listen on catch up for a few weeks here from 2h 6mins.

I found the process as interesting as the discussion, observing the professionals busy at their work. I was fascinated watching Kat do her broadcast, having to listen to the producer over the headphones, briefing us and setting up the next section during records and jingles, and bursting into radio speak at just the right time to make what I imagine was a fairly seamless show.

I was equally impressed with the amount of cooking I watched Lee cram into the hour alongside being interviewed. He cooked a crumble, buckwheat pancakes and three different types of Scotch egg! And all I did was stand by and chip in the odd opinion. And for anybody who listened, I must apologise for having to describe my body’s reaction to gluten live on the radio – and at breakfast time.

I hope the show was useful to help people understand what it’s like to be coeliac and also give things to think about if you are cooking for somebody who needs to eat safe, gluten free food.

So on to the cooking: First was the crumble. This was lovely and crunchy. The main tip Lee gave us for this recipe was to cook the crumble separately and add it at the end, so it keeps its crunch. It also means you can keep the leftovers ready for the next time. 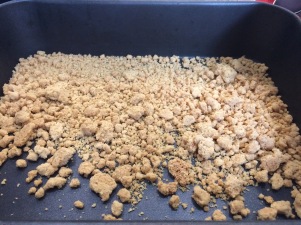 Rub the ingredients together or mix in a food processor, then bake at 170C for half an hour, turning regularly. You can use the mixture to top stewed fruit and custard or even just sprinkle on yoghurt.

Lee also cooked us a breakfast buckwheat pancake.  Buckwheat is naturally gluten free but is frequently cross contaminated, so you would need to buy carefully.

Mix well to make a batter then fry as a normal pancake. Ours was filled with cheese, ham and mushrooms whilst still on the heat, so it was all melty and lovely.

Finally, and rather amazingly, Lee treated us to three different kinds of Scotch egg! These take a bit more preparation, but were absolutely delicious. 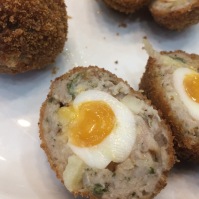 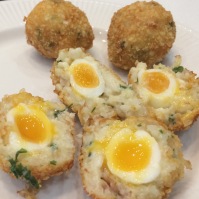 First, cook the eggs in boiling water for 2 minutes, then plunge into cold water to stop them from cooking, and peel the shells off. Wrap the egg in sausage meat, then coat in the flour, the egg wash and the breadcrumbs. Cook in a deep fat fryer at 180C for 5-8 minutes. Bear in mind you’d need to use a clean fryer and un-contaminated oil.

In this recipe, the sausage meat was replaced with roughly blended chicken thighs, mushroom, tarragon and seasoning. Instead of breadcrumbs, Lee used crushed gluten free oatcakes, which gave a different texture

This one was my absolute favourite. Instead of meat, Lee wrapped the eggs in a smoked haddock risotto, made slightly stickier than normal and with loads of parmesan. After the flour and egg wash, these were dipped in crushed poppadoms before frying, instead of breadcrumbs.