I don’t normally write second reviews of places, but I decided to make an exception for The Angel in Holmesfield. We went there to celebrate my mum’s birthday at the weekend and the gluten free offer is just awesome. Most of the food is gluten free and most of the rest can be tailored to be. There are only one or two things that aren’t. It was such a pleasure to see so many GFs on the menu, and we were in the very unusual position of being spoiled for choice!

For starters, I had some delicious Thai crab cakes with chilli dipping sauce. We also had scallops with crispy bacon and parsnip puree, and one of their regulars, a chunky seafood chowder. 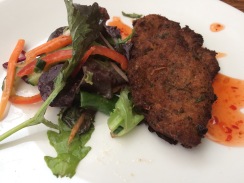 For mains, my mum and I went halves each on two main courses because we couldn’t decide between them. One was pork tenderloin with smoked bacon rosti, maple glazed apple and cider sauce, and the other was spiced fillet of seabass, parmentier potatoes, onion bhaji and rocket with a yoghurt dressing. They were both lovely, but for me, the pork had the edge. The meat was beautifully succulent and the sauce was smooth and divine. Really impressive. 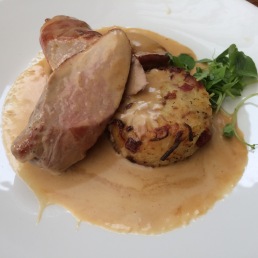 The Angel is right at the top of my list for great gluten free pubs. I’ve rarely been somewhere with so much choice and it makes for a very relaxing dining experience when you know the chefs and serving staff totally ‘get it’. We felt really well looked after.

At £13-15 per main course, it’s not everyday prices, and it’s a bit of a drive out of Sheffield, but it’s well worth it for a treat.  I’m looking forward to going back already. Whose birthday is next..?