This week we had a school inset day on Monday, so months ago we arranged with some friends to make the most of the extra day by taking the kids camping. And for once, we were rewarded with amazing weather! We went to a lovely rural campsite not too far away in the Peak District, where we were able to take the boys bike riding, have BBQs and generally hang out in the sunshine. And it was a pure joy to wake up feeling warm under canvas, instead of a shivering wreck as per my normal camping experiences.

On the first morning we had bacon butties with tomatoes and beans for breakfast – classic camping fodder. But with a limit to the life of our cool boxes, I chose mostly baked goods for day two’s breakfast, with (non GF) pain au chocolat and crumpets for the kids. I wasn’t particularly looking forward to that breakfast, but I had a rather pleasant surprise in the form of Genius’ sliced fruit loaf.

I have had a bit of a downer on Genius recently, having had quite a few loaves with massive holes in, the remains of which crumbled upon touching. So I hadn’t been in a rush to try this fruit loaf. But it seemed worth taking camping.

I toasted a few slices in a pan on our stove then slathered on some butter, and was impressed with the result. The bread even before toasting had a good texture, and didn’t crumble at all. Toasting really brought out the cinnamon flavour and the lovely juicy currants and raisins. Even the non coeliacs were impressed. 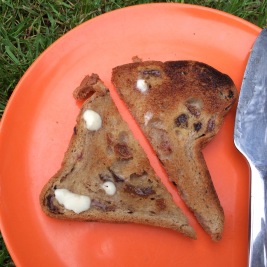 As with all gluten free bread, at £2.50 for a 400g loaf, it’s not the cheapest, but I’d say it’s relatively good value for money, particularly as all the slices were edible!

I’ll definitely be buying this one again. I might even keep some in the freezer for nice weekend breakfasts.

Thank you, Genius. A good loaf at last.