I was delighted to discover through Twitter that we have a new(ish) American BBQ restaurant in Sheffield serving a whole range of gluten free food. I am a big fan of smoked food so we hot-footed it down there on Sunday to give it a try.

The BBQ Collective is run by a husband and wife team using traditional American BBQ methods. The company started out as a street food trader in West Hampstead but recently paired up with Ossett Brewery at The Hop in Sheffield at West One. So it’s a funky new place selling craft beers (including the gluten free Brewdog Vagabond pale ale) and BBQ – what’s not to love?

I was very pleased to find a menu that was liberally sprinkled with GFs. All the BBQ meats are gluten free – these include pulled pork, spare ribs, beef ribs, sausages, chicken, salmon and various mixed platters. The southern fried chicken (I’m having that next time) can also be cooked GF, and there are a variety of tempting sides including Texas pit beans, smoked sweet potato, slaw and even the fries. (The fries aren’t yet marked GF on the menu – I’m told it still needs a few tweaks.) 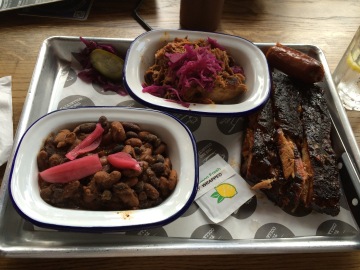 I chose a combination of pork spare ribs and pulled pork, with sides of pit beans and slaw. You can also see a sneaky hot link sausage in the picture that had crept on from somebody else’s tray.

There were four home made sauces of varying heat (raging from mild to death) to drizzle on the meat. I’m a bit of a wimp and didn’t fancy the death, but I loved the Kansas City mild on my spare ribs.

The food was great and the portions were massive. The ribs were very succulent and the pit beans nice and spicy. The buttermilk fried chicken that my five year old had was very popular with the crowd. My brother in law ordered the four meat sampler and it could have fed the entire family! To be fair, it’s probably for two to share.

We clearly weren’t the first people to ask for a doggy bag as the staff were ready with a take out tray to load our (literally) spare ribs into. We were too full to eat them that evening, so we had them with a bit of scramble for breakfast the following day. Delicious. 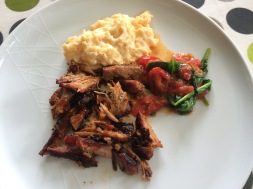 We’re looking forward to going back some time soon and I’m told by the joint owner, Mathurot, that smoked fruit and gluten free ice cream will be coming up on the dessert menu shortly. We may be tempted to go back to sample it.

So – definitely worth giving this place a try. Just make sure you’re hungry!