I took the opportunity to pick up some of the very well reputed Voakes…free from pies while I was at the Sheffield group AGM last week. I’ve been meaning to try them for a while now, and they are a fairly local company (York), which is great.

They sell quite a selection, with pasties, sausage rolls and all sorts of pies: pork, steak and ale, chicken, game, spiced lentil and vegetable…

I went for a pork & black pudding pie and a pork & chilli chutney. I also picked up some of their ready to roll pastry.

I used the pastry to make this chocolate & pecan pie. Although I think the pastry is probably more suited to savoury pies, it worked out reasonably well. It rolled out well and was very easy to handle, which was unusual for GF pastry. I rolled it out on some cling film and turned it out onto a greased flan dish.

I trimmed the edges really roughly, intending to trim it properly after blind baking, but by then it had become a bit too crisp to make a good job of it so I ended up leaving it. It also receded slightly. Hence the rather free form shape! But it turned out rather well once it was filled and baked.

As for the pork pies, we heated the two pies and shared them between four of us as a sort of amuse bouche before our tea. We’re very classy! They really were delicious – well filled with great flavour and excellent pastry.

Even my pie-loving non-coeliac husband and father both approved. The latter went straight on to the Voakes website to see what could be ordered, with the thinly veiled excuse of convenience for my mother. 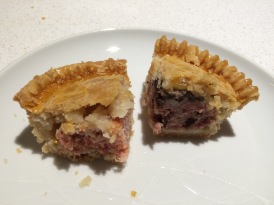 I’d definitely buy the pies again. Great to keep in the freezer for when you want an easy, comforting tea, and proof that gluten free food doesn’t have to be second rate. The delivery cost is a set amount regardless of how much you order, so make some room in your freezer…