What do you suppose is the collective noun for coeliacs? The best I could come up with is a glut. Feel free to do better… 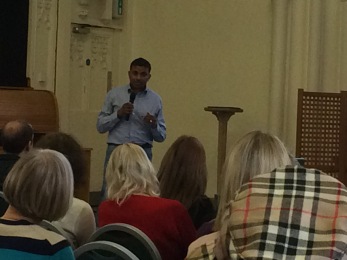 On Saturday I went to the Coeliac UK Sheffield group AGM (at St Mary’s) for the first time, where I was helping to sell raffle tickets for the charity. It was a particularly interesting meeting to go to as there was much discussion of the new prescribing rules for coeliacs in Sheffield.

The number of items available per prescription has been slashed from 16 to 8, which is a bit shocking. Obviously for some people, it’s not such a problem, as there are now larger ranges of gluten free food available in the supermarkets (albeit outrageously priced – £3 for a tiny loaf). But for people on low incomes or who might not have access to a large supermarket or the internet, this is potentially a huge deal. The prescriptions are for staples – flour, bread, porridge oats. We’re not all getting free biscuits on the NHS. And let’s not forget, plenty of coeliacs still have to pay for their prescriptions – myself included. It’s really not a free ride.

A completely gluten free diet is the only medication for coeliacs – it’s not a lifestyle choice. And without it, there are serious health implications further down the line, which would incur even bigger costs to the NHS. Unfortunately, those who are making the decisions will have moved on by then. They just care about cutting costs now.

Sheffield has a high number of gluten free prescriptions. Why? Because we have a world class gastroenterology department headed by an internationally renowned professor, David Sanders. Professor Sanders and his team are diagnosing lots of people who would otherwise continue to suffer from painful and distressing symptoms. Preventing these people from going on to develop complications such as osteoporosis, anaemia, malnutrition or even in rare cases, cancer, saves the NHS plenty in the long term.

Prof. Sanders is drafting a letter for everybody to send to their MPs to try to reverse this decision for next year. Hopefully I’ll share this when it’s available. We’ll need to make a lot of noise very soon.

And off the soapbox…

Also at the AGM was the chance to sample and buy goodies from some gluten free producers. Local Sheffield company Miss Adu’s Kitchen was promoting her bread and cakes, as well as the renowned Yorkshire gluten free pie maker, Voakes…free from. I’ve been meaning to try their pies for ages, so that was all the incentive I needed to get down to St Mary’s (more on that next time). Barkat also had a stall showcasing their wide range of cereals, cakes and biscuits.

So, information, gluten free goodies, other coeliacs. What more could you want? In the middle of the room are tables with little plates of biscuits on. And I could actually eat them for once – that felt weird!