Inspired by the (not GF) bangers and mash ‘your way’ menu option at a recent pub visit, we had a crack at our own, gluten free version when we had a house full of family the other week.

I’ve tried quite a few brands, and the Black Farmer sausages are always a favourite, but I can usually only get their plain pork ones. I was over the moon to find these Jolly Hog sausages with gluten free black pudding and apple. It’s not too difficult to come across GF black pudding, but in a sausage! The Porky Blacks were fab, and even a hit with people who aren’t into ‘neat’ (?) black pudding. Tonnes of flavour.

So we cooked three kinds of sausage (baked in the oven). Alongside the Jolly Hog Porky Blacks, we had Jolly Hog with caramelised red onion, and plenty of Black Farmer pork and herb for the less adventurous. 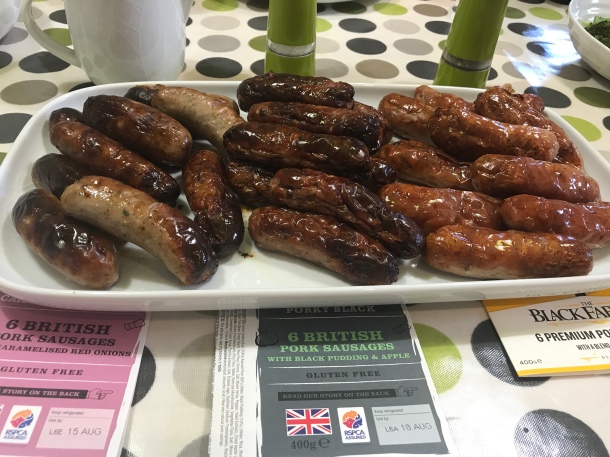 We cooked a big pan of regular mashed potato and another of carrot and sweet potato mash. Top tips for making mash for a crowd:

While the potatoes were boiling and the sausages were cooking, we made two sauces – onion gravy and cheese sauce.

When there’s no meat juices to add, I make an onion gravy by caramelising finely sliced onions in oil and butter, with a touch of sugar. Stir in some flour to soak up the oil, then add beef stock, a generous glug of red wine and plenty of Hendo’s. Bubble away until the desired thickness is achieved.

For the cheese sauce, I melt butter in a pan, then stir in some gluten free plain flour to soak it up. Add cold milk, whisking all the time, then plenty of grated cheese. Once the cheese is added, don’t let it boil, otherwise it will split.

Feel free to ask in the comments if you’re interested in a more detailed recipe for any of this, but I’m not generally one for much measuring!

We served the bangers on a big platter, the mash in two big dishes, and the sauces in two gravy jugs, and let people help themselves. It was grand.