We had some friends round for tea a few weeks ago and I fancied doing some mini desserts to nibble at in the evening. After a lot of wasted time looking through recipe books and failing to find quite what I wanted, I managed to get some better inspiration from the good old web. 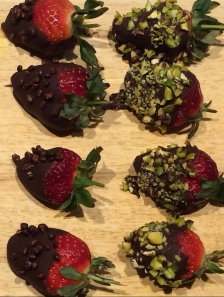 I made a couple of simple but effective mini-puds, as well as a third I’ve not included, that was very much edible, but not as good and much more faff.

The easiest was strawberries (I know, not quite in season) dipped in a mixture of melted dark and milk chocolate. I use Green and Black’s as a default, which is deemed safe by Coeliac UK. I rolled the dipped strawberries in either chopped pistachios for a bit of colour, or popping candy for a fizzy crunch! (I was very pleased with myself for thinking that up.) These went down rather well with the kids. 🙂

Next was something I’ve been intending to try making for ages, peanut butter cups. Frustratingly, I only took photos of the finished article, so you can’t see the stages of how they were made, but it was very simple.

I followed this Martha Stewart recipe, which involves making alternate layers of melted dark chocolate and a mixture of peanut butter with melted white chocolate. Again, I used Green and Black’s white and the dark 70%.

I used petit four cases (unfortunately I could only find brown ones) in a mini cake tray and topped them with unsalted peanuts, which I chopped and baked to give a bit of colour and crunch. You need to get the nuts on quickly while the chocolate on top is still wet, so they stick.

Both of these are easy crowd pleasers. I need to come up with a third to go with them though. Suggestions on a postcard… or rather in the comments.

Ironically the other day, somebody on Twitter suggested an even quicker version of peanut butter cups, which is to dip a square of dark chocolate in some peanut butter. I immediately regretted finding out about about this possibility, as I went straight to try it out. A very good return for next to no effort, but definitely something I kind of wish I could un-know.