It’s taken a while, but I’ve finally got my hands on one of the new Pizza Express gluten free margheritas. After repeatedly being unable to find one at our local big Sainsbury’s store on Archer Road, I got in touch with Sainsbury’s via Twitter and found out you can log a product request, which I duly did.

They also told me that the GF pizzas are available at the Dronfield store. So we dropped by at the first available opportunity with the intention of picking a few up for the freezer, but only found two! Well, it’s enough to be going on with…

I pimped the topping with some bits and bobs from the fridge and put it in the oven at the recommended 200C. The packet suggested 7-9 minutes but I thought the bottom was still a bit soft, so gave it an extra minute or so. (I realise this is dull information, but there’s not so much to say about the cooking process of a pre-prepared pizza.)

We were very pleased with the results though. The base is thin and not too doughy, and it tasted really good. Of course, it’s very similar to what you get in the restaurants, so it met my expectations easily. 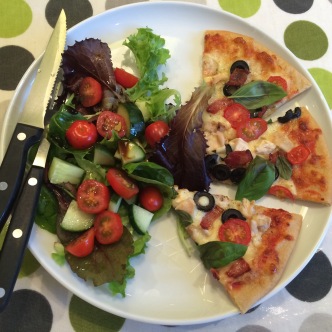 It’s been a long time since I’ve been able to have a decent pizza at home. In the pre-coeliac days, we used to make pizza dough ourselves in our bread maker as a family treat, so it’s something I’ve missed. I have had a delivery from Dominos in the past but that’s incredibly expensive, particularly now there are two gluten dodgers in the house. The price for this was £4, so no more expensive than the standard Pizza Express cook at home range, which is nice for once!

I’ve had some success with Orgran pizza mix which you can actually get on prescription, but sometimes it’s just nice to have the convenience.

I still keep meaning to try making my own gluten free pizza base, but for now, this one will do nicely.