We were looking for somewhere to go for a Sunday lunch with my mother in law, who lives in Broomhill, and Tripadvisor suggested The Doctor’s Orders, which is right next to the Hallamshire hospital on Glossop Road. We’d always thought it was just a student pub, but it has very good reviews on Tripadvisor for food and specifies gluten free, so we decided to give it a whirl.

It’s a fun, themed pub, with medical memorabilia, such as  a full height skeleton and old fashioned framed advertisements. It was interesting explaining some of these to the boys!

The kids really enjoyed reading the Staff Prescriptions board and spotting who was serving us. We’re fairly certain Liam R and Rob looked after our table, and very attentive they were, too. They obligingly took my various ingredients questions to the chef and came back with confident answers, which is always reassuring. 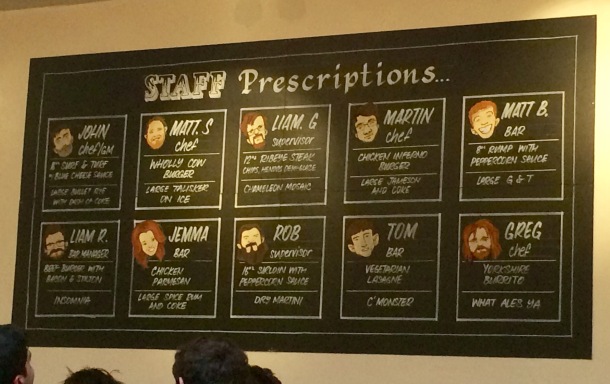 There were a few gluten free choices marked on the menu (e.g. steaks, nachos, baked Camembert). Others can be made gluten free, such as the fish and chips (they have a separate fryer, but don’t batter the fish for GF) and the burgers, which can be served with a gluten free bun.

We decided to order a starter portion of nachos to share. I took a photo but it’s not pretty because we’d already started eating, so it won’t do it justice. It was a great big bowl full – plenty for all 5 of us to have a helping, with a generous amount of the cheese, salsa, chillies and chicken toppings.

For mains, my older boy tested out a gluten free burger. He went for the Smokey Swine, which was a monster stack of pork, bacon, pulled pork and cheddar on a pretty good gluten free bun. It came with some great wedge chips and a nicely spiced bbq sauce. A whopping portion, which he thoroughly enjoyed. 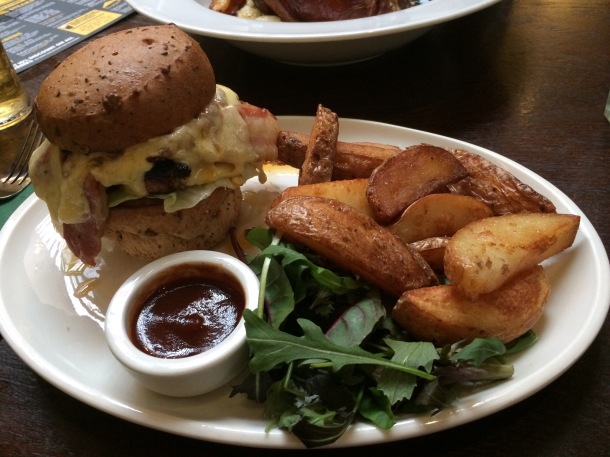 I opted for something a bit more Sunday lunchy from the specials menu: a whole ham hock served with creamy apple mash, honey roast carrots and parsnips and a cider jus. It wasn’t marked as GF, but I was informed it was.

I too was presented with a proper Yorkshire portion. I’m not sure anybody really needs to eat a whole ham hock in one meal (and I consider myself a bit of a pig, so that’s saying something). But it did taste divine. The meat just fell apart, and the mash sweetened with apple was fantastic – a very well balanced flavour.  The only thing it could have done with is a bit of green veg because it was so rich, but all in all, I really enjoyed it. I’d say the jus was a gravy to be honest, but that’s not a complaint – I like gravy. 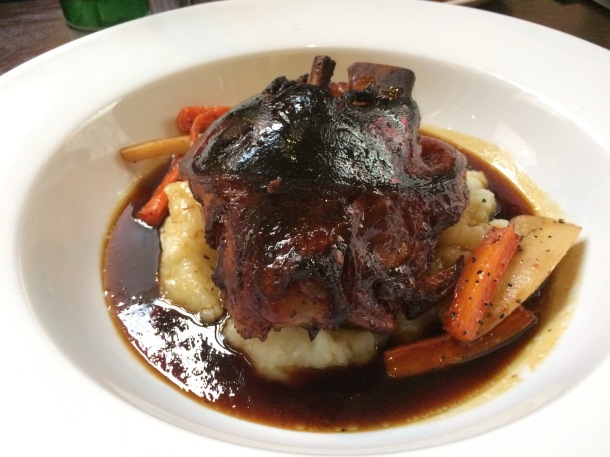 We really enjoyed our meal, but were far too stuffed for pudding. Mind you, there didn’t seem to be any gluten free choices on the menu, and I forgot to ask! I did enquire about the Sunday roasts and found out that they have gluten free stuffing, but not gluten free Yorkshire puds.