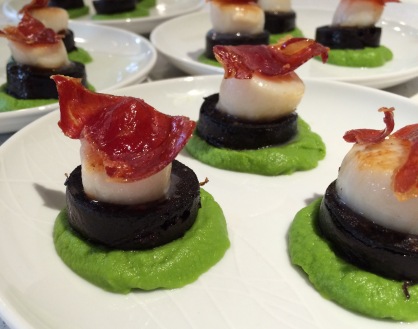 Look at this – I’ve actually taken a decent food photo!

Hubby and I had a little dinner party the other weekend for Valentine’s day. I decided to invite the kids to it. Yes, it somewhat takes the romance away, but why not, I thought. I dug out the proper linen napkins and actual napkin rings and put flowers on the table, then we interrupted the boys from their Wii Star Wars to tell them we were having a posh meal together. All very lovely. Well, they thought it was a bit weird.

My lovely mother bought me a gluten free black pudding from the Bury Black Pudding Company recently (see their website for interesting black pudding trivia) so I splashed out on some scallops and Parma ham for our starter.

I started by laying out the ham on a baking sheet and baked it in the oven for 10 mins or so until it went crispy. About 190C. Once cooled, break into pieces.

For the pea puree, I browned some onions in a pan, then a good couple of handfuls of frozen peas and a pinch of vegetable stock powder and just covered them in boiling water. After simmering for a couple of minutes, I transferred them to the blender using a slotted spoon. Peas and onions first, then only a bit of the cooking water (you can always add more later…) The Vitamix made light work of creating a silky smooth puree.

I lightly pan fried the black pudding slices, and the scallops until they had a bit of colour, then it was just an assembly job: pea, black pudding, scallop, ham. It was really rather divine, and I could have eaten it several times over.

So did the kids like it? I knew boy 1 would, as he loves all the constituent parts of this, and boy 2 ate it all, but said he wasn’t keen on the “special fish” (he wouldn’t touch it if he knew they were scallops). He would probably have preferred the pea puree with the ham! But then he’s only five.

And no, we haven’t yet filled them in on how black pudding is produced. Too soon.