I went out to Ashoka on Ecclesall Road for a Christmas meal last week. And I’m very pleased to report that it’s another good option for gluten free food on Ecclesall Road, as there don’t seem to be that many at the moment, particularly individual places that aren’t part of a chain.

I called the restaurant in advance to check if they could cater for gluten free, and they sounded very knowledgable on the phone. Even more encouraging, when they called to confirm the booking, they checked that we still had coeliacs in the party. Good start…

The restaurant is very small inside and busy, which is always a good sign, other than that we had to wait for our table for quite a while in a small  area at the bottom of the stairs in the way of everybody! Thankfully, wine arrived fairly quickly, but we were very pleased to sit down and get out of everyone’s way. 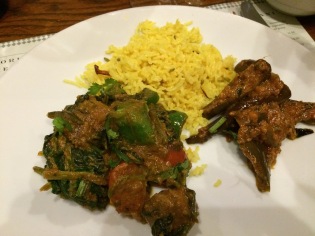 The menu is on a large paper table mat, and the owner/maitre’d was happy to explain what was off limits and literally crossed them out on my menu. This was most of the starters, unfortunately, and obviously the bread accompaniments. All the mains and side dishes were in play, as were the poppadoms, which was a relief.

So we shared some poppadoms and pickles, which most people agreed were really rather good ones. Mind you, we were famished!

The menu has plenty of choice with all the familiar dishes you expect, and a few twists. For main course, I ordered Mr Singh’s Saag Karai, which was a delicious lamb curry with spinach. Rustic looking and very flavoursome, but fairly mild. Mind you, they will make dishes hotter if you like them that way.

As a side, I was very keen to try the Ginger Brinjal, which is aubergine with fresh ginger. This had a bit more of a kick to it, and was really rather good, and different to anything I’ve had before.

A few friends tried their trademark Karamelised Kashmiri, which is a unique dish to Ashoka that contains caramelised onions. That went down extremely well with everybody in both lamb and chicken format, and I can indeed vouch for it being a great dish. The mixed grill that two people shared was very generous.

The different curries were very distinct, which was great, and contained plenty of meat with just the right amount of sauce. Not like the sort of place where you get a couple of pieces of chicken swimming in a pool of curry sauce. Proper food.

So a great meal, and topped off by the entertainment at the end of the meal when the waiter brought over the hot towels. I don’t want to spoil the surprise here so you’ll have to go and see for yourself – suffice it to say we had to ask for extras! 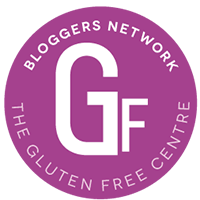