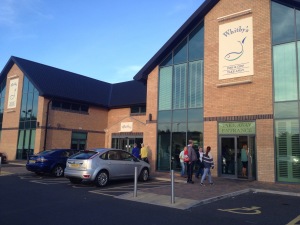 My youngest boy’s absolute favourite meal in the world is fish and chips. Which is why I was delighted when somebody on Twitter let me know that there is a chippy in Sheffield that serves gluten free fish and chips.

As it was small’s birthday this week, there seemed no better option than to take him to check out Whitby’s in Catcliffe for eat-in fish and chips. Not our usual Sunday tea, but it saves on the washing up. There were seven of us, so we booked a table for 4pm, and the restaurant was surprisingly busy. (The only reason I say that is because I would have assumed most people would be eating a roast dinner on Sunday afternoon.) 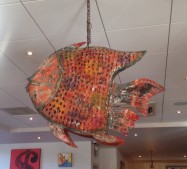 There are two Whitby’s restaurants: this one in Catcliffe and the second in Doncaster, in a converted fire station, which sounds quite fun. The Sheffield ( or is it Rotherham?) restaurant is sited on an industrial estate in a rather less characterful building, but inside it’s quite cheery with lots of colourful art prints on the wall and this huge fish hanging from the ceiling over our table.

The restaurant and the take away are housed in separate parts of the building, which is quite thoughtful.

The menu is varied, with much more than just standard fish and chips on offer: there are starters, with gluten free options of prawn cocktail and soup. For mains, the standard cod, haddock and plaice can be served in gluten free batter, floured and fried, or poached, and there’s also a gluten free seafood pie available, along with a variety of fish salads. I went for the haddock and chips in gluten free batter, with some garden peas. (Sadly, no gluten free gravy – I really miss that – but you can’t have everything.) The food came reasonably quickly and was rather good and generous portions. Nice crispy batter and well cooked fish (I can’t stand over-cooked fish) with good, chunky chips, which I slathered in ketchup (also GF). So far so good – everybody enjoyed their main course.

Happily, having consulted with Coeliac UK, I was also able to indulge in salt and vinegar on my chippy tea, as the fermentation process involved takes enough of the gluten out of the malt vinegar to make it safe to eat.

None of the desserts on the menu were marked gluten free, but I thought it was worth an ask, given that ice cream and rice pudding are on there. Imagine my surprise when I was told that all the desserts were or could be tailored to be gluten free! Really? Even the sticky toffee pudding? Let me check with the kitchen… Yes, that’s also gluten free. I became rather over-excited at the prospect of a home made date sponge sticky toffee pudding with custard, but it was short lived, as when the order was placed, a message came back from the chef that no, it wasn’t gluten free after all. Aaargh. My hopes were dashed. There were still options of rice pudding and ice cream, but I was too disappointed to order anything else. It sounds a bit silly, but I was. I don’t mind being told things aren’t safe to eat – it’s par for the coeliac course – but a let down like that slightly took the shine off my dining experience.

Anyway, the rest of my family had desserts and the portions were immense. My newly five year old ate a heroic amount of a full size portion of the sticky toffee pudding (Yes, I had to watch him eat it and look happy about it as it was his birthday! Ah well, at least I had a glass of wine…) and the seven year old had a knickerbocker glory that was so big he had to kneel up on his chair to eat it.

All in all, we had a great meal apart from the dessert disappointment. It was nice to be able to eat in, as this place is too far from where we live to use as a take-away. The prices are very reasonable, portions generous, staff friendly if slightly uninformed, and plenty of choice. I’m sure we’ll be back…

(There seem to have been one or two other chippies serving gluten free fish and chips in Sheffield over the years,but I’m not sure if they are still open. The best well known seemed to be Green Steps on Hickmott Road, which unfortunately closed down a few years ago. I gather it turned into the Banner Chippy on Ecclesall Road South but I’m not sure if they are still open for business. Other possibilities for gluten free options may be Townend Fish Bar on Gleadless Road and Seafayre on Charles Street. If anybody knows about these and their gluten free credentials, please let me know! I have checked with the new Harry Ramsdens on Ecclesall Road South, and they are not able to serve gluten free food.)