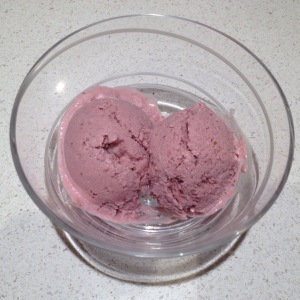 My recent discovery of nut creams and brief obsession with them has led me to experiment with home made ice creams:

I blended about 100g cashew nuts with a little water to make as smooth a cream as possible in my mini-whizzer. I then added some strawberries and a bit of agave nectar and blended again. I put it in the freezer in a tupperware and gave it a good stir every couple of hours until it was frozen. (I won’t allow myself to buy an ice cream maker as consumption would go through the roof!) Freezing in a freezer is rather more labour intensive though, and requires stirring every couple of hours to break up the ice crystals and avoid it turning into a massive ice lolly!

Easy peasy, and it tasted great, although the whizzing did take a good half hour and maybe it could have been a bit smoother…

So if you decide to make this, ensure you start in the morning or early afternoon! I once started a sorbet too late and had to set my alarm twice in the night to get up and stir it – that’s commitment for you. Or poor organisation. Still, it tasted delicious. 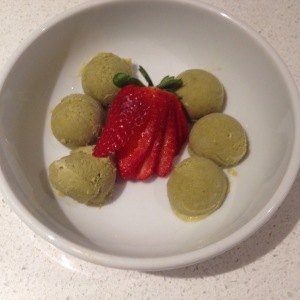 The success of the strawberry & cashew inspired me to try making one of my all time favourite flavours, pistachio. I didn’t want to spend hours with my mini whizzer and risk its demise through over-heating, so this time I blended about 300g pistachios with a bit of water in my friend’s Vitamix high speed blender. This produced a silky smooth pistachio cream in a matter of a few minutes and I added some agave nectar to sweeten it.

As 300g makes a fair quantity, I split the pistachio cream into 3 batches to experiment with the freezing. The first third went in the freezer as it was, the second, I mixed with plain yoghurt, so it was two thirds pistachio and one third yoghurt, and the final third was mixed with double cream in the same quantities – two thirds/one third.

I stirred them every few hours and after a while, it became apparent that the ‘naked’ batch was getting rather stodgy and wasn’t going to make good ice cream. So to avoid wasting it, I mixed half of it into each of the yoghurt and cream batches.

Once frozen, I scooped some of each out with a melon baller, and although you can’t really tell them apart, the ice-cream is on the left of the bowl, and the frozen yoghurt is on the right.

I thought the ice-cream version was best, but hubby preferred the yoghurt one, which has a slightly tangy taste. I think they make a great guilt free treat in a small portion. My mum, who’s also fairly low-sugar, enjoyed them both, but my Dad has a very sweet tooth and thought both versions needed much more sweetening. You could always drizzle some honey on top.

I think I’d be most likely to make the cashew and strawberry ice cream again, although all of them tasted lovely. Next time I’ll see if I can make it silky smooth with my friend’s Vitamix, then it’ll be perfect.